Poughkeepsie Journal: Stars and moon reason enough to look up to the skies! Stargazers a close community 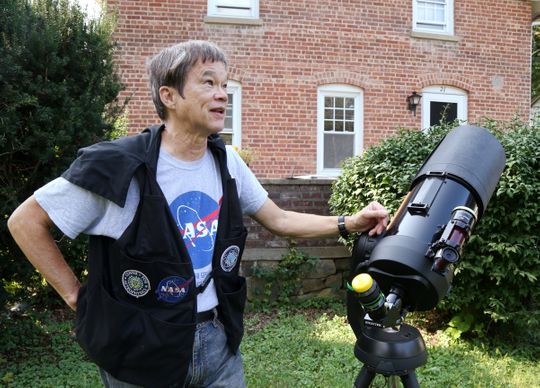 Physicist Stephen Hawking once said, “Look up at the stars and not down at your feet. Try to make sense of what you see and wonder about what makes the universe exist. Be curious.”

In the day and age of cellphones and texting, Hawking had it right that we need to look up at night.

Some of us already go.

Traveling the world to see the stars

When psychiatrist Willie Yee was a little boy, he visited a planetarium on a school trip and did exactly what Hawking said — he became curious about the stars. Today, the retired 73-year-old New Paltz resident has six telescopes of all sizes, has traveled all over the world, including to Chile, for stargazing nights, and is a member and former president of the Mid-Hudson Astronomical Association.

One of his fondest stargazing memories was with his daughter, Irene Yee.

“Seven years ago, we were traveling back from Ticonderoga, after working on a project where Star Trek fans make their own episodes,” he said. “It was crystal clear out, no moon, no clouds and no pollution, and Irene opened the window and told me to look at the stars. It was absolutely amazing because you could see more stars than you ever saw in your entire life.”