Hundreds participated in a one-mile fun run/walk down Main Street in the City of Poughkeepsie for the ThinkDIFFERENTLY Dash held on Saturday, June 10. The “first leg” of the weekend-long Walkway Marathon Race Series provided members of the community of all abilities with a race of their own through downtown Poughkeepsie. 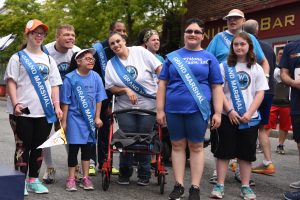 More than 300 participants ran, walked or rolled  the one-mile course, which started at Hamilton Street and finished on Market Street, where many well-wishers, including the elected officials mentioned above, awaited to encourage the participants.

“The ThinkDIFFERENTLY Dash has once again proven itself to be the ‘feel-good’ event of the year. This wonderful race in the heart of Poughkeepsie demonstrates the strength of diversity, and the openness of inclusion The ThinkDIFFERENTLY Dash is now central to the Walkway Marathon Race Series,” said Walkway Executive Director Elizabeth Waldstein-Hart. “This race is all about bringing the community together for inspirational activities. And today there were many smiling, caring people participating with enthusiasm!”

This year’s Dash was co-chaired by Linda Campbell, Arc of Dutchess Director of Marketing and Employment Services and Toni Ciarfella, Dutchess County Deputy Commissioner for Special Needs. Linda Campbell said, “We thank all of our partner agencies for their commitment to the ThinkDIFFERENTLY initiative in Dutchess County, and we applaud all of our Grand Marshals, race participants and the agencies they represent for their energy, enthusiasm and will to succeed!”

Dutchess County Executive Marcus Molinaro said, “While I’m looking forward to running in the half-marathon race tomorrow, I take great pride this weekend in participating in the ‘ThinkDIFFERENTLY’ Dash, our second annual run/walk for individuals of all abilities through the City of Poughkeepsie. We in Dutchess County are proud to ‘ThinkDIFFERENTLY’ about our neighbors with special needs. Instead of focusing on what differentiates us, we look for the innate potential of each individual – and the Dash invites participants of every age and ability to excel.”

City of Poughkeepsie Mayor Robert Rolison said: “The City of Poughkeepsie is honored to host this exciting event on Main Street once again, and we applaud all athletes. We are inspired by strong showing of our community — residents, business owners, family members and friends – in support of our ThinkDIFFERENTLY Dash athletes and the entire Walkway Marathon Race Series.”

Partner Agencies selected participants to serve as “Grand Marshals” of the Dash. Grand Marshals of the 2017 ThinkDIFFERENTLY Dash were:

Organizations partnering with Walkway Over the Hudson on this year’s Walkway Marathon Race Series and the ThinkDIFFERENTLY Dash include:

The Walkway Marathon Race Series, created in partnership with Dutchess County Government, is made possible by contributions from more than 20 sponsors, in-kind donations and media partners. Top sponsors include: