Thanks to a grant from the Dyson Foundation, the Hudson River Valley Institute at Marist College conducted an oral history project designed to collect and archive a living history of the remembrances of people associated with the Poughkeepsie-Highland Railroad Bridge. The research, writing, and interviews will be an invaluable record for the future, chronicling many diverse people associated with the history of the Poughkeepsie Highland Railroad Bridge, now known as the Walkway Over the Hudson State Historic Park. Members of the faculty and staff as well as interns and students at Marist College videotaped and transcribed in-depth interviews of approximately 35 volunteers who had a personal affiliation with the Walkway organization and/or the bridge itself. A sampling of the interviews is below.

Tom Lake: A lifetime resident of the Hudson Valley, employee of NYS Department of Environmental Conservation and writer for Hudson River Almanac, Tom Lake provides a rather unique environmental perspective of the Poughkeepsie-Highland Railroad bridge. Tom tells us that due to its longevity, the bridge has become a naturalized citizen of the Hudson River, and he shares a few ideas regarding the river's Quadricentennial that occurred in 2009.

Bernard Rudberg: Bernie was a railroad historian and enthusiast and the author of Twenty Five Years on the ND&C: A History of the Newburgh, Dutchess and Connecticut Railroad. His interview recalls the years when the railroad bridge was in operation.

Nancy Cozean: Former City of Poughkeepsie Mayor, Nancy Cozean credits Congressman Maurice Hinchey for his tenacity in securing funding for Walkway Over the Hudson. She was prescient in her statements that once the Walkway was completed it would increase business and commerce in the northern part of Poughkeepsie.

Tony Marano: A lifelong railroad man, he currently lives in Maybrook and works for the Maybrook Railroad Museum. Tony is a wealth of stories and anecdotes about life on the railroad. Read more in this 2017 piece in the Times Herald-Record.

Mary Yankjtis: A resident of the Hudson River Valley for more than forty-five years, Mary shares her experience of the Poughkeepsie-Highland Bridge. As an educator, Mary sees the bridge as a marvelous tool to teach young children about the Hudson Valley.

Linus Foy: Linus Foy is a former president of Marist College and a life long educator and brother to the college. He offers memories of living in close proximity to the bridge as well as observation on the fire that ultimately shut it down. 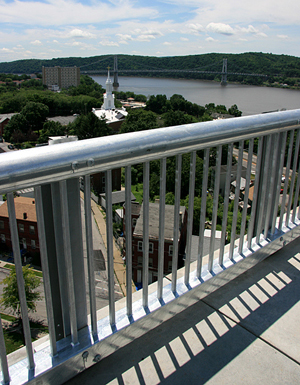