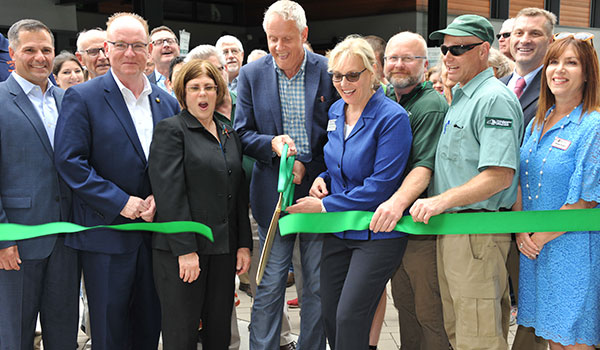 Next Round of Improvements Will Include a New Friends Pavilion

Governor Andrew M. Cuomo announced the opening of the $3 million Dutchess Welcome Center at the eastern approach to Walkway Over the Hudson State Historic Park. The multipurpose facility creates a new welcoming gateway in time for the Hudson Valley tourism destination’s 10th anniversary. Governor Cuomo announced the next phase of improvements will include a new pavilion and expanded gathering space at the Poughkeepsie entrance.

“This park has drawn hundreds of thousands of people in the last decade to see its spectacular views and to experience the shops, restaurants and neighborhoods on both sides of the Hudson,” Governor Cuomo said. “With these improvements, the experience will be even better. If you haven’t come yet, this is the year to do it.”

“The new Welcome Center in Poughkeepsie will serve as a great resource for information and showcase local products to visitors that travel to the Poughkeepsie area year-round,” said Lieutenant Governor Kathy Hochul. “The Walkway Over the Hudson State Historic Park already attracts individuals and families from all over to take advantage of the trails and sites that we have to offer. This Welcome Center will further grow the Hudson Valley as a tourist destination and strengthen the economy of the region.”

The new 1,800-square-foot Welcome Center, with entrances off both Washington Street and Orchard Place in Poughkeepsie, includes bathrooms, bike racks, tourist information, an outdoor patio with seating, and a dog-friendly water fountain.

The next phase of improvements currently in design will be a Washington Street Arrival Plaza in Poughkeepsie, which includes a pavilion for the Hudson Friends group to use for information, souvenir sales and vending machines, as well as benches, rebuilt stairs and rainwater cistern to irrigate its new plantings.

The eastside improvements are funded by Governor Cuomo’s NY Parks 2020 program to revitalize the state park system, in partnership with the not-for profit Walkway over the Hudson Friends group, which raises funds to help support the park.

“Thanks to the support of Governor Cuomo and his overall vision for the parks, these improvements at the Walkway will encourage even more people to visit this amazing place, as well as help them enjoy the experience, understand the history behind it, and find their way around once they are here,” said Erik Kulleseid, Commissioner of New York State Parks, Recreation and Historic Preservation.

Empire State Development President, CEO and Commissioner Howard Zemsky said, “The new Dutchess Welcome Center at the Walkway Over the Hudson is a great addition to a popular Hudson Valley attraction that will invite more visitors to explore the region and support local businesses.”

“The Friends of the Walkway join with Governor Cuomo and the New York State Office of Parks, Recreation and Historic Preservation in celebrating these new amenities on the Walkway Over the Hudson,” said Elizabeth Waldstein, Executive Director, Walkway Over the Hudson. “Our fruitful partnership over the last decade has led to two welcome centers, pavilions, community spaces, interpretive signage and so much more as we strive to be among the most accessible parks in the nation.”

Senator Sue Serino said, “The Walkway is a true Hudson Valley gem that draws thousands of residents and tourists each year who in turn contribute directly to our local economy. These improvements will go a long way to further improve access to the park and will help visitors make the most out of their time spent at one of our community’s finest attractions. Our local area is home to some of New York’s most impressive parks, and we thank the Governor and Commissioner Kulleseid for recognizing the importance of making continued investments in such an important part of our community.”

Assembly Member Didi Barrett said, “For the past 10 years, the Walkway has been one of the Hudson Valley’s standout attractions, giving both visitors and locals a chance to appreciate the breathtaking natural landscapes our region is known for. The new Dutchess Welcome Center will enhance this experience and encourage people to take in the views in new ways – from renting a bike to bringing a beloved canine companion along.”

A glassed-in elevator that takes visitors on a dramatic 212-foot, 21-story ascent to the Walkway has also been rebuilt, using new “energy chain” technology that was unavailable when the unit was first installed.

This feature is expected to increase operational reliability and allow the elevator to open earlier in the spring and continue operating later into the fall. The elevator is located at Poughkeepsie’s waterfront at Upper Landing Park, a short walk from the Metro North train station.

Previously an unused railroad bridge for Poughkeepsie-Highland Railroad, the Walkway opened as a state park in 2009 after decades of neglect.

With its sweeping views of the Hudson River Valley and beyond, the 1.28-mile span has become a major tourist destination, now drawing nearly 600,000 visitors annually.

Last year, a study by the Friends group confirmed that tourism from the Walkway is boosting the local economy, with first-time and returning visitors shopping and eating in restaurants. More than five million people have visited the Walkway since it opened.

This summer free family movies will be shown under the Walkway at Upper Landing Park, 83 North Water Street, Poughkeepsie. The movies include Mary Poppins Returns (June 29), Spiderman: Into the Spiderverse (July 6), How to Train Your Dragon 3 (July 20), Shazam! (July 27) and Captain Marvel (Aug. 10). Opening acts begin at 7 p.m., with movies starting at sundown.

In Poughkeepsie, the Walkway also connects to the Dutchess Rail Trail, a 13-mile multi-use trail from the former Hopewell Junction train depot. This trail forms part of the prosed Empire State Trail, which envisions a multi-use trail from Manhattan to the northern tip of Lake Champlain, and from Albany to Buffalo.

State Parks oversees more than 250 parks, historic sites, recreational trails, golf courses, boat launches and more, which were visited by a record 74 million people last year. For more information on any of these recreation areas, call 518-474-0456 or visit www.parks.ny.gov, connect with us on Facebook, or follow on Instagram and Twitter.