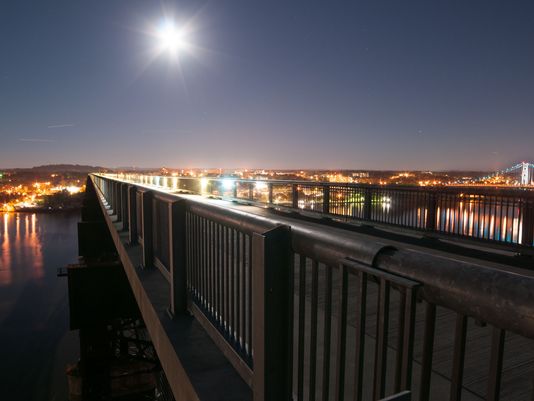 From the Poughkeepsie Journal: Beyond the Walkway Over the Hudson State Historic Park, lights from Poughkeepsie brighten the night sky.(Photo: Julian Diamond/courtesy photo)

A NASA astronaut is set to come to the Walkway Over the Hudson State Park on Sept. 7 as part of the nonprofit’s Starwalk series.

The educational series gives children and adults alike an opportunity to take in the “staggering horizon-to-horizon view of the night sky” and learn about the stars, according to a press release from U.S. Sen. Charles Schumer. The senator came to the Ulster County entrance to the walkway on July 3 to detail his push for a NASA astronaut to attend a Starwalk event.

At Starwalks, the Walkway is lined with astronomy enthusiasts and educators from local colleges prepared to speak with attendees. Activities typically include viewing constellations through telescopes and learning nighttime photography tips.

Schumer said in the release that bringing in an astronaut will help further the program’s mission of inspiring the next generation of world-class scientists.

“Providing our students with all the tools necessary to learn about and become interested in scientific research and the environment has always been a top priority of mine,” he said in the release. “Not only will this inspire a new generation of scientists in the Hudson Valley, it also builds on NASA’s commitment to education and scientific research.”

Walkway Over the Hudson Board Chairman Mike Oates said in the release, “We couldn’t be more thrilled that NASA will be providing us an astronaut.

“We owe a big thank you to Sen. Schumer for his unwavering support of our application and STARWALK program,” he said. “We can’t believe how quickly his support helped make this a reality.”