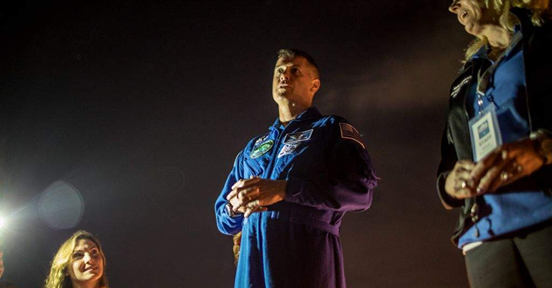 HIGHLAND — Ruby Schwager, 10, may be headed to Mars even if NASA astronaut Shane Kimbrough can’t make it.

Schwager, of Poughkeepsie, clutched her little brother’s replica NASA shuttle lashed to its boosters as Kimbrough collected Walkway Over the Hudson T-shirts and other memorabilia during his visit to the Walkway on Friday afternoon.

Kimbrough, in his NASA blue coverall, spent several hours at the Ulster Welcoming Center enthralling about 100 observers with tales of his exploits to and from and in outer space.

It was an event combining the Walkway’s effort to bring the heavens to mid-Hudson residents through a program of gazing at the stars from the Walkway through telescopes with a NASA astronaut.

The space explorer’s Walkway visit was the brainchild of U.S. Sen. Chuck Schumer, who could not attend the event in person but did make an appearance by telephone.

Kimbrough’s bio is impressive: He made six spacewalks during nearly 189 days in space and flew missions on the U.S. shuttle and Russian craft to and from the International Space Station.