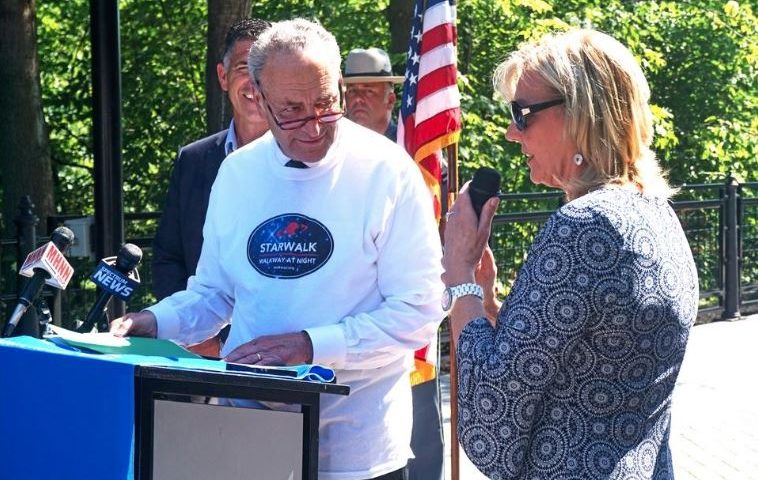 U.S. Sen. Chuck Schumer has a lot on his mind these days — the Supreme Court, health care, Roe V. Wade — and Tuesday he visited the Walkway Over the Hudson and got a cap to keep it all in place.

“Am I allowed to wear it?” Schumer asked of his staff as the sun beat down on the patio of the Ulster Welcome Center at the Walkway. In his hands, he held a glow-in-the-dark cap emblazoned with “STARWALK” to commemorate a new nighttime star-gazing program of the Walkway.

“We have a rule on my staff,” Schumer said, a rule set by his chief of staff, Mike Lynch. “I am a ‘yes’ person. I like to do everything. He is a ‘no’ person. He keeps me out of trouble. He has a rule for me — no singing, no dancing — and no hats.”

Then to laughter and applause from the crowd of about 30 he said “I’m doing it” and put on the cap. The slogan on it matched that on the T-shirt he already had on over his long-sleeved white dress shirt and tie.

One day after his opinion column on the future of the Supreme Court appeared in the New York Times, Schumer stood at the Walkway to say he is writing to the administrator of NASA. His request: Send an astronaut to one of the Walkway’s new star-gazing events.