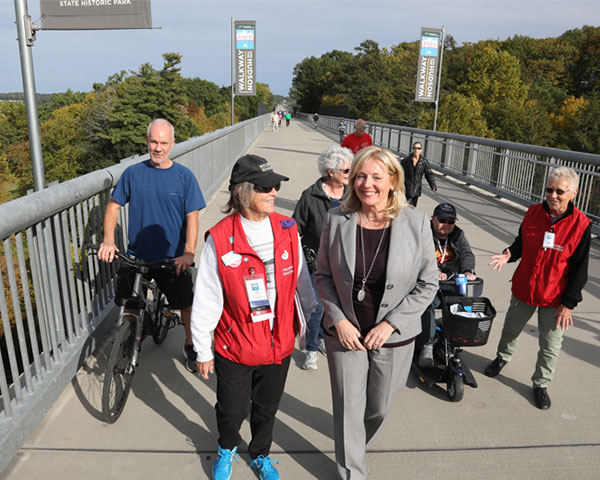 Elizabeth Waldstein, Executive Director of Walkway Over the Hudson, the nonprofit friends organization charged with stewarding Walkway Over the Hudson State Historic Park in the community, has been honored with a Hudson Valley Magazine Women In Business Award. She is one of 16 chosen for this prestigious recognition.

To support Elizabeth’s efforts to ensure Walkway Over the Hudson State Historic Park is a vibrant and thriving community connector, visit walkway.org/donate.

The Walkway Over the Hudson has become one of the Hudson Valley’s iconic destinations, thanks largely in part to the devoted efforts of Elizabeth Waldstein. During her nine years as executive director, the organization’s budget has grown from $227,000 to $953,000, currently supporting a robust series of programs, services, and events for nearly 600,000 visitors annually.

This is no surprise to those who know Waldstein well, as philanthropic efforts have been a priority for a majority of her life. While in college, she worked on a research project in Nepal that helped empower local women in the areas of personal finance and literacy. Since moving to Hyde Park in the early 2000s, she has been active in various community projects, including bringing a skate park to Hyde Park, and serving as the project director for a partnership formed to purchase and restore more than 200 acres of historically significant property, reconnecting the Franklin and Eleanor Roosevelt National Historic Sites with the construction and interpretation of Roosevelt Farm Lane.