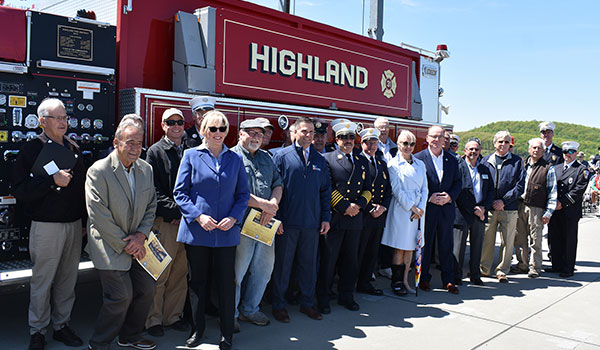 On Wednesday, May 8 at 11 a.m., Walkway Over the Hudson State Historic Park hosted local first responders on the Walkway to commemorate the 45th anniversary of the great fire that crippled the Poughkeepsie-Highland Railroad Bridge in 1974.

In all, 26 firefighters (or representatives from their families) who battled the blaze were present and honored. Chief Peter Miller of the Highland Fire Department, who was part of the crew that fought the 1974 fire, and Chief Mark Johnson of the City of Poughkeepsie Fire Department delivered remarks.

“It’s kind of funny how your mind treats memories,” said Peter Miller, Chief, Highland Fire Department, during the ceremony. “It feels like the Walkway Over the Hudson has been here forever, and that the Poughkeepsie-Highland Railroad Bridge fire was yesterday.”

“Thank you for this recognition,” said Mark Johnson, Chief, City of Poughkeepsie Fire Department, during the ceremony. “This is what our guys do every day. We don’t seek the recognition, but we appreciate it.”

According to various published reports, on May 8, 1974, a spark from an eastbound train ignited railroad ties on the Poughkeepsie-Highland Railroad Bridge. By the time the fire was extinguished, over 700 feet of track was damaged. At the time, officials from Penn Central Railroad estimated the bridge would be repaired and reopened to rail traffic before the end of the year, but no trains would ever again cross the span and the structure sat dormant for decades.

“We were out here fighting fire for about ten hours that day,” continued Chief Miller. “Our success was a testament to all the firefighters from different departments working together in mutual aide.”

“Firefighters dealt with very challenging conditions on May 8, 1974,” continued Chief Johnson. “Immense smoke, water systems didn’t work, fires below the Walkway as well. But what we had then that we still have today is teamwork. That’s how we do it in the fire service.”

In October 2009, following a years-long grassroots community campaign, the bridge was reopened as Walkway Over the Hudson State Historic Park, which has since welcomed more than five million visitors to enjoy sweeping panoramic views of the Hudson River Valley.

“We are proud to acknowledge the heroes of that day and the first responders that have kept us safe ever since,” said Elizabeth Waldstein-Hart, Executive Director of Walkway Over the Hudson. “As we move closer to our ten-year anniversary in October, we will continue to celebrate significant events in our past. The great fire of 1974, unbeknownst to anyone at the time, was the first step toward the birth of the Walkway.”

Community members with photos or recollections of the 1974 event are encouraged to share them through Facebook or via email at walkway@walkway.org.