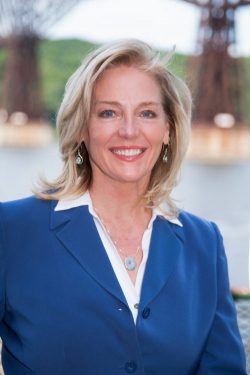 Elizabeth Waldstein-Hart, Executive Director of Walkway Over the Hudson, has been named by The Chamber Foundation, Inc. as one of ten 2018 ATHENA Award honorees. Presented annually, the ATHENA Award recognizes community leaders for their career accomplishments, volunteer involvement, and willingness to serve as a mentor – especially to women in the business community.

“It is a great honor to join my nine fellow honorees in receiving the ATHENA Award,” Waldstein-Hart said. “I am gratified to become part of the distinguished list of previous recipients, and I thank The Chamber Foundation and the selection committee for this recognition.”

Waldstein-Hart has served as Walkway Over the Hudson’s Executive Director since 2010. Under her direction, Walkway has raised more than $8 million from competitive grant funding and private sources to support major programmatic and capital initiatives such as the Dutchess Rail Trail connection, construction and opening of the Ulster Welcome Center, and many Walkway Master Plan improvements including benches, lighting, signage, the Washington Street pavilion, and design and construction of both West and East Volunteer Pavilions.

ATHENA Award honorees will be recognized at The Culinary Institute of America on Thursday, November 29 from 5-8 p.m. For complete information about the event, visit ChamberFDN.org.