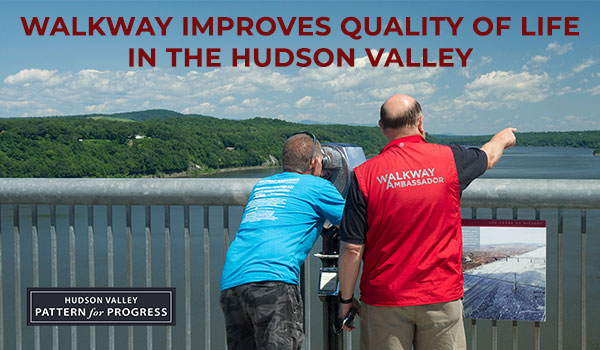 “We’re happy that the research conducted by Pattern for Progress has validated what we already knew anecdotally – that the Walkway Over the Hudson is a tremendous community resource that is positively impacting not only Poughkeepsie and Highland, but a large stretch of the Hudson Valley,” said Walkway Over the Hudson Executive Director Elizabeth Waldstein-Hart. “We extend our sincere thanks to Pattern for Progress, the Pattern Fellows, Marist College, and all of the volunteers that assisted in collecting this data to make this study possible.”

“Collaborating with our partners for this important study fit perfectly into Pattern’s mission of improving the quality of life in the Hudson Valley,” said Pattern President and CEO Jonathan Drapkin. “State parks like Walkway Over the Hudson contribute tremendously to enhancing the experience of living in a community, and we believe this report delivers a clear view of the impacts the Walkway has had. One area that we found especially important was the power of the Walkway for gathering people together for local causes and non-profit fundraising events.”

The study concludes: The beauty and accessibility of the Walkway Over the Hudson has had widespread positive impacts on the Quality of Life of residents and tourists, as well as beneficial impacts to local businesses and other tourist attractions. The introduction of public parks in urban areas has been correlated with a decrease in mental and physical health issues, which are widespread in impoverished areas, through an increase in social interaction and an increase in exposure to nature, showing that “a community’s quality of life is directly tied to both the quantity and quality of parks and green spaces.”

The entire Quality of Life Study is available for download at walkway.org/qualityoflife

The self-reported demographics found in the Quality of Life Study provides a snapshot of who uses the Walkway, how they use it, and how often they use it.

The data contained in the Quality of Life Study comes alive via the personal stories researchers collected during their study, like that of a despondent 66-year old Poughkeepsie woman who once ventured on the Walkway while considering to end her life. But, as she told researchers, when she made it to center of the Walkway and took in the beauty of her surroundings, she had a moment of profound clarity, felt “closer to God,” and regained the will to live thanks in part to the serenity of her surroundings.

The analysis in the Quality of Life Study draws primarily on first-hand research conducted by four teams using different methods and tools. In all, 830 points of data were collected.