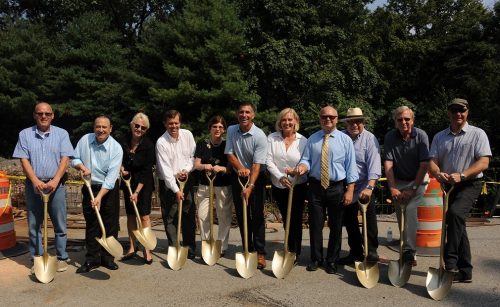 The Walkway Over the Hudson organization and New York State Office of Parks, Recreation and Historic Preservation (NYSOPRHP) hosted a ceremonial groundbreaking on Tuesday, August 22nd to mark the beginning of construction of Walkway State Historic Park’s new Ulster Welcome Center – a multipurpose visitors center, comfort station and office space being built by NYSOPRHP at the bridge’s western approach.

The $4.5 million Welcome Center represents the state’s latest investment in a series of planned improvements designed to enhance the popular state park, all part of the NY Parks 2020 initiative. The Walkway, which opened in October, 2009, attracts nearly 500,000 visitors annually and will be a major hub on Governor Cuomo’s proposed Empire State Trail.

“Construction of the Ulster Welcome Center shows that our partners in New York State government recognize the need to invest in parks and recreational infrastructure,” said Walkway Executive Director Elizabeth Waldstein-Hart. “We are grateful to Governor Andrew Cuomo, New York State Parks Commissioner Rose Harvey and our partners throughout state government for their continuing commitment to Walkway Over the Hudson and the entire state parks system.” The Walkway organization has also completed Phase 1 of a tour bus turnaround and parking area on Haviland Road. That facility will be completed after construction of the Welcome Center.

The ceremonial groundbreaking, which featured representatives from several partner agencies and elected official’s wielding gold-painted shovels, took place at the future site of the Ulster Welcome Center at the park’s West Approach off of Haviland Road in the Town of Lloyd. The Project, which was funded largely through NYSOPRHP as announced during Governor Andrew Cuomo’s June 2016 visit to the Walkway, represents one of two important upgrades to the state park that will also include a similar welcome center planned for the Walkway’s eastern approach in the City of Poughkeepsie. Construction on that project is scheduled to begin in 2018.